How it works with Safe TMS

SAP ChaRM and Safe TMS are not competing products. On the contrary, Safe TMS can provide additional security checks during the transport phase of ChaRM.

Being part of SAP Solution Manager, ChaRM (Change Request Management) provides a standardized flow to capture, utilize, approve, implement and transport changes on the system. If you are using ChaRM already, Safe TMS offers complementary functionality at the transport phase. 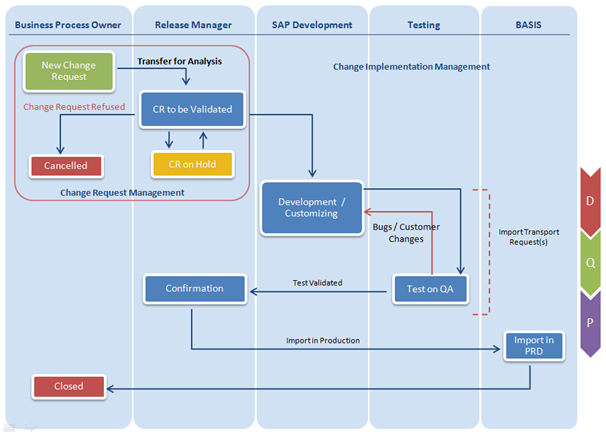 If you are utilizing the automatic transport functionality of ChaRM, it means that transport requests of a change request are transported without manual STMS operations.

In that case, Safe TMS can be used as an add-on with help of enhancements. Additional object and ticket checks of Safe TMS will help prevent errors on the live system.

If you have chosen the manual path, it means that transport requests of a change request are transported by your basis team with manual STMS operations.

In that case, Safe TMS can be used as the central cockpit of the transport phase. Instead of conducting manual SE01, STMS, etc. operations on various systems, your basis team can use Safe TMS to execute the entire transport process. All features, including object and ticket checks of Safe TMS will be active and help prevent errors on the live system.

Introduced in Hana 20*, gCTS lets you conduct ABAP development and transport processes over the GIT protocol instead of SAP's Request mechanism. See the comparison below.

✅ Installation: Safe TMS is installed to the development server only and very quickly. You can start using it immediately. gCTS requires a relatively complex installation & configuration to all SAP systems.

✅ Architecture: Safe TMS can be used over your existing software architecture. gCTS requires fundamental architectural changes; such as splitting developments into distinct packages.

✅ Competence: Safe TMS doesn't require extra competencies. gCTS would require your programmers and consultants to learn about the GIT protocol and gCTS mechanism.

✅ Automatic transport: If configured correctly; gCTS can transport requests between SAP systems automatically. It can also be integrated into pipeline systems, such as Jenkins.

✅ Transparency: If the development process is designed correctly; branches and versions of each development can be seen transparently. Responsible developers can be seen along the changes they made.

✅ Independent code base: Your new code base will be the GIT server, not a development system. This is suitable for cases where a development will be programmed in & distributed to multiple servers.

✅ Conflict resolution: If the branch logic is used correctly; code conflicts due to parallel modifications can be naturally detected due to the GIT protocol. Software team lead can review & resolve such conflicts.

✅ Undo transport: If the development process & branch logic is conducted correctly; it is possible to return to a previous version on the target system in case an error is detected.